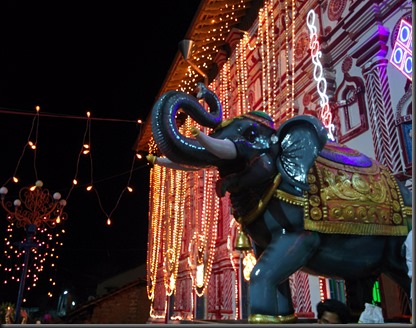 Marikamba Fair is one of the biggest jatra of Karnataka held in temple town of Sirsi. Over a lakh devotees,tourists and pilgrims gather from Maharashtra,Goa,Tamil Nadu,Andhra,Kerala and all parts of Karnataka making it one of the biggest festivals in the region. This fair is held every alternate year. This year it is celebrated from  March 11th to 19th.

As the legend says, the Goddess(form of Durga) is said to have told a devotee in dream that her insignia was to be found in a tank on the outskirts of the town and to derive benefit to the region by its installation and worship. Accordingly the original idol is being worshipped since 1688.Unfathomable are the ways of Gods, whose mere wishes can transform a wilderness into a town in no time. The then little known village of Sirsi of about 200 inhabitants is today brimming with a population exceeding 100,000 and is flourishing as the richest region of the district, only because of the kind grace of the auspicious Goddess Shri Marikamba(It is also known as Doddamma Temple, with “Doddamma” denoting the “elder sister” of all Maraiammas in Karnataka).

Chariot getting ready for the D-day.

When Mahatma Gandhi visited Sirsi in 1933, during his campaign to abolish untouchability of Dalits, he refused to visit the temple, as animal sacrifice was a prevalent ancient practice at the temple; the sacrifice was in the form of offering of he-buffalo as a sacrifice to appease the goddess. A he-buffalo was specially bred for offering as a sacrifice to the deity during the annual Rathayatra. Following the protest by Gandhi, there was a social movement in the town not only to abolish animal sacrifice but also to allow Dalits entry into the temple.

Some historical facts about the temple