Traveling leaves you speechless, then turns you into a storyteller.

Wayanad district at the southern tip of Deccan Plateau is one of the popular destinations in Kerala. It borders both the neighbouring states- Karnataka and Tamil Nadu. The folk etymology of the word Wayanad says it is a combination of Vayal (paddy field in local language) and Naad (land) meaning ‘Land of Paddy fields’.

I had planned a weekend getaway with Crazy Yatra (a travel group who organizes treks) to Wayanad. We were a group of 33 members all excited to be in nature’s lap in Wayanad for next 2 days. We started from Bengaluru on a Friday night at 8 pm amidst cool breeze and rain.The rain added to our traffic woes due to water logging in some areas. Settling down in the bus after multiple pickups on the way and fuel refill, the organizers started a intro session. Some of them had been to previous outings from Crazy Yatra and others like me were travelling for the first time with them. Along with the intro, each one of them was supposed to share at least one of their crazy moments. It was nice hearing diverse experiences from fellow yaatris like scuba diving, free fall, getting lost during a trek, dancing in the middle of a highway at midnight with onlookers looking surprised, doing cabre dance in a supposedly cultural college event etc.

On the way to Mysuru, we stopped at Maddur for a quick bite for famished lot. Our target was to reach a town called Meppadi at 6 am the following morning, but only managed to reach at 7.45 am. Upon reaching our hotel rooms in Meppadi, got freshened up and had a nice breakfast with local delicacy like appams and sambar smeared with (generous amount of) coconut oil.

Now that we were all set and excited, it was time to scale the Chembra Peak- the highest peak in Wayanad at 6900 ft above sea level. To reach the base point we had to travel around 5 km in a jeep.

The organizers got a quick permission for trekking from the forest guards.  If you’re carrying any plastic water bottles, one needs to register their names. If you fail to bring it along on return, pay a fine- a welcome move to prevent littering of the place.

Chembra peak trek comprises of 3 levels- about 1 km easy trail from the base point to watch tower, a 2 km trail through the forests, rugged terrains and grasslands from watch tower to heart shaped lake and finally a 1.5 km stepper trail from the lake to the summit.

Currently, it is permitted only to trek till the lake because of some restrictions imposed by the forest department.

The trail from the watch tower was through forests and steeper at some points. In between we could catch some amazing views of the tea estates. The sun was playing hide and seek and to our respite there were water streams in between to freshen up.

Traversing the rugged terrains, we reached the grasslands where one could see the misty peak. As it was early September, some of them got bugged by leaches when walking through the tall grasses.

Finally,we reached the heart shaped lake called as Hriday Saras (Hridayam is heart and Saras means lake in Malayalam). This lake is believed to have never dried up. We then caught some breathtaking views from the top and spent some quiet moments, a sense of satisfaction after having scaled the peak.

We started descending the peak and when we reached the watch tower for a much needed break, it started raining making our trail slippery. We braved the rain to reach the check post where the jeeps were waiting to drop us back to the hotel.

After freshening up, we had a quick lunch to board our bus to our next destination -Soochipura water falls. It is also known as Sentinel Rock waterfalls. Locally referred as Soochipara (Soochi meaning needle and Para meaning rock).

In about a hour journey passing by wide expanse of tea estates, we reached the waterfalls. After issuing of tickets and keeping our bag aside we plunged into the water to reach the base of the waterfall. All the tiredness of the trek went away with the refreshing dip into the water.One of the guys had brought a GoPro waterproof camera with a stick and next half an hour was spent for selfies,groupies.

Then, it was time to relax for the day, so we went back to the hotel to freshen up. There was sufficient time to stroll through the streets of Meppadi after which it was time for dinner. A delicious dinner was waiting for us after which we went to a hall on the top floor. One of our fellow traveler was celebrating her birthday, so we brought a cake. While she cut the cake, everyone encircled her dancing along as she was the made the center of attraction. Just as she was all excited and happy for a lovely gesture, all hell broke loose when the organiser  took the whole cake and stuffed into her face. No one ate the cake that day except her face. Next an hour or so was spent playing some games as some of them retired for the day.

After having a sumptuous breakfast, we headed to Neelimala View point where all the 3 neighboring states-Kerala, Tamil Nadu and Karnataka can be seen from a height. We descended from our bus from the road and hopped into a jeep to reach the point as it was a rugged terrain. What we experienced on the Jeep was one helluva ride with lot of ups and downs. On the way to the point we spotted coffee plantations along with ginger and areca.

As we reached the point it was misty and the panoramic view was playing hide and seek. After a whole when it cleared up, it was such a mesmerizing sight. No words to describe it, just have a look.

We also spotted Meenmutti waterfalls (Meenmutty is a combination of Malayalam words Meen (fish) and Mutty (blocked))  and posed for photographs.

Then it was time to head to Eddakal Caves for further exploration. Eddakal caves are two natural caves at a remote location at Eddakal, 25 km from Kalpetta in the Wayanad district. We had to climb up a elevated terrain to reach there. Here again one was supposed to register for any plastic ones carry which was a welcome move.We could capture some spectacular views on the way. 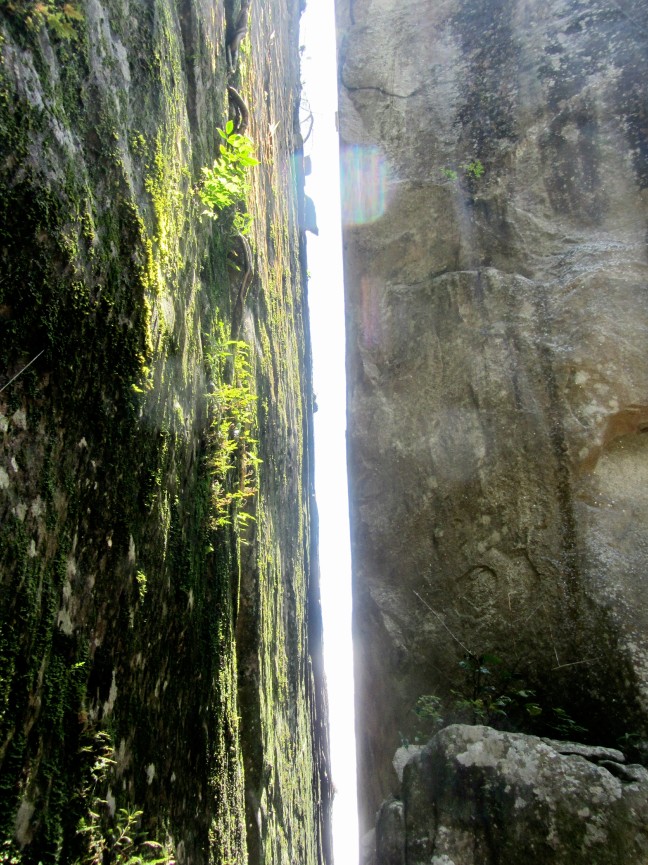 Through a guide, we understood the significance of these carvings which was one of a kind. Inside the caves are pictorial writings believed to date to at least 6,000 BC, from the Neolithic man, indicating the presence of a prehistoric civilization or settlement in this region.The Stone Age carvings here are rare and are the only known examples from South India.After some exploration, it was time to descent and reach the hotel to checkout.

As we headed to Bangalore playing games all the way, we halted at a place called SultanBathery for lunch.

It was such a wonderful experience and more so because of Crazy Yatra for organizing it in a best way possible.